Croatia has an exceptionally fortunate location. It has got the azure waters of the Mediterranean Sea and scattered islands with awesome beaches and towns near the seashore. You can generate hundreds of sailing routes in Croatia, all in different places. Here are the most interesting ones.

Most of the Croatian sailing routes start from large cities with airports. Such are Split, Dubrovnik, Zadar and Pula. Laying them, keep in mind that the weather can change and you will have to change the route on the way. You can also fall in love with one of the islands, beaches, or cities on the way and not want to go further. Remember this when planning your boat trip.

Split is the second biggest city in Croatia, founded more than 1700 years ago. Modern glass and concrete houses stand next buildings from the Renaissance and the following centuries. This city is like a large museum, created for lovers of different eras and civilizations.

This route is for those who want to take a break from the big tourist cities and see the nearest islands. There are towns here, too — but small and not crowded with tourists like on the coast. Tiny Vis with its churches and palaces stands on the Greco-Roman ruins, Lastovo is a village with unusual chimneys. Trogir stands out them with its special atmosphere and intertwining narrow streets. 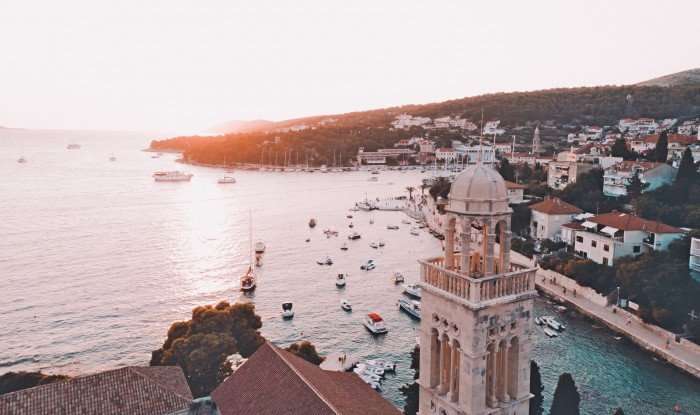 Rent a yacht in Split and head to the islands you’ve never seen before. Korcula, overgrown with ancient pine trees, raises grapes and produces excellent wine. Hvar is the sunniest island on the Adriatic, with lavender fields close to the coast. The legendary Blaca Monastery, carved into a rock, is hidden in the picturesque Brača. And on Mljet, there just forests, lakes and coves with wild beaches.

It is said you can see the whole of Croatia in one place in Dubrovnik. When you get here, you can easily believe it. Everything is here: stunning landscapes, diverse architecture from Roman to modern, beckoning beaches and restaurants with local cuisine. The city is one of the most beautiful resorts in Europe.

The route runs along the shores with countless coves and hundreds of small islets. Almost all of them has a picturesque anchorage. You move smoothly from the bustling cities (Sipan) to the tiny islands with a minimum of tourists (Lastovo). Plus you can search for the most deserted and picturesque cove near the shores of Mljet Island.

Ston Island deserves a separate short story. Salt is produced here by the very method used by the ancient Greeks and Romans: by evaporating it in the sun. Also, the waters are so clean here that locals import oysters and mussels all over the world. Luckily, you can taste them right here on the spot.

Zadar is a small resort that attracts millions of tourists every year. Sailing enthusiasts from all over the world come here. You see a rugged coastline from the town and wish to explore the nearest coves as soon as possible. Don’t forget to shop before you leave: Zadar produces the world’s most delicious cherry liqueur, Maraskin.

Fewer tourists visit Northern Dalmatia than the Southern one: the climate is colder here, and there is less time to laze on the beaches than in the south. The region has a minimum of tourists, unhurried cities that are not spoiled by civilization, and the pure nature of the surrounding islands.

In the trip, you will get to the city of Rab, where people lived in the IV century BC. Locals have built here plenty of interesting objects since then, so plan your time with a reserve for Rab visiting. Fishermen, yachtsmen and divers sail to Ugljan: the desolation of the eastern coast attracts them. And the island of Krk (not the same with the Krk national park) is the heart of Croatia. It is often placed on Croatian banners that attract tourists for its natural diversity.

Pula is located on the Istrian peninsula, in the very west of Croatia. It became Croatian recently after the 2nd World War. From here, Italy is a straight shot — and the places here differ from the rest of Croatia. Sometimes it seems as if you sail along the shores of the Republic of Venice that had existed 500 years ago. Cities here have a wild mixture of all the cultures and epochs that have been present in this area.

Pula sailing routes run along the Istrian peninsula all the time. You’ll find the islands near the shore though: Brijuni, with its rugged coastline, are separated from the mainland by a small strait. By the way, the name of the Brioni brand comes from this place.

Umaga, the westernmost Croatian town, has the oldest lighthouse in the Adriatic. Near it, there are semi-submerged ruins from the Roman Empire, which will be appreciated by diving enthusiasts. Poreč has a watchtower, which is considered one of the most romantic places in Istria. Finally, Rovinj attracts tourists with its round peninsula, where the old town with the bell tower of St. Euphemia on the highest point is located.